The Bear Finesse at a Glance

Welcome to our Bear Finesse compound bow review. One of the few compound bows on the market specifically designed for women, the Bear Finesse features an extra-short axle-to-axle length, an extremely light weight, a shorter than normal draw length, and a single, soft, cam design. However, all of this is achieved by sacrificing arrow speed and thus, the Bear Finesse is rather slow when compared to most other compound hunting bows.

The Bear Finesse is a compound hunting bow that is designed specifically for female archers. Consequently, it features a single, FH1, soft cam combined with a round idler to make it very easy to draw. Also, the FH1 cam features a rotating module that enables the archer to adjust the draw length from 23 inches to 28 inches without the need for additional cams or a bow press. 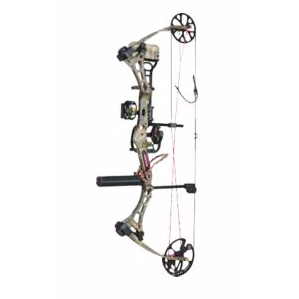 Although the Bear Finesse has an IBO arrow speed of only 285 FPS when set to a peak draw weight of 50 lbs., it is still fast enough to make an excellent hunting bow since most recurve bows generate even less arrow speed. However, even with its relatively slow arrow speed, the Bear Finesse still generates enough kinetic energy to enable an archer to hunt even the largest game species. But, it should be noted that IBO speeds require at least 5 grains of arrow weight per pound of draw weight but have no standard for draw length. Consequently, bow manufactures who list IBO speeds invariably use the lightest arrows that meet the necessary criteria combined with the longest draw length available on any given model in order to produce the highest possible arrow speeds. Learn more about what speeds to actually expect.

Please note: the values listed above are based upon arrow speeds measured immediately in front of the riser. Therefore, in order to determine the Bear Finesse’s kinetic energy output at different ranges, you will need to subtract approximately 1.8 ft-lbs. from the values listed above for every 10 yards of distance from your target.

Although the Bear Finesse lacks the extreme parallel limb design of most modern hunting bows, its single soft cam generates very little vibration when the string is released and thus, it also generates very little noise. In fact, it is such a quiet bow to shoot that string dampeners are not really necessary for hunting. However, with the addition of a string dampener and a stabilizer, it generates almost no vibration at all when compared to a modern compound bow with a hard cam design.

Using the Bear Finesse for Hunting 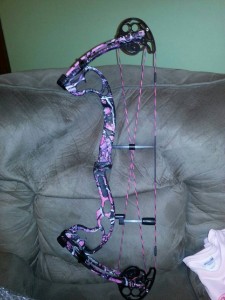 With an IBO arrow speed of only 285 FPS, the Bear Finesse does not produce a particularly flat arrow trajectory and thus, a hunter must be adept at accurately gauging the distance to the target. Also, with an available draw weight range of only 30 to 40 lbs. or 40 to 50 lbs., it is somewhat limited in the amount of kinetic energy that it can impart to arrows fired from it. However, even at its lowest draw weight, it is capable of humanely harvesting deer sized game animals and at its highest draw weight, it is capable of harvesting large game species such as Elk and Moose provided that heavy enough arrows are chosen (see section on kinetic energy).

Therefore, the following Easton chart will provide you with some idea of how much kinetic energy is needed for hunting different game species:

Consult our “Kinetic Energy” section above to determine how much KE to expect from the Bear Finesse depending on your settings. 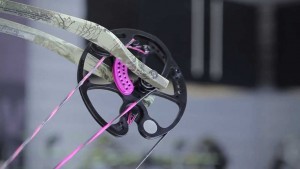 Even though the Bear Finesse has a moderately reflexed, machined aluminum, riser, it also has a generous 7 inch brace height which makes it very forgiving of minor errors in shooting form. Also, even though the riser itself is relatively long, the split limb design helps to reduce overall weight and thus, the bow weighs a mere 3 lbs. without accessories. Also, like most compound bows on the market today, the grip consists of a bare, rounded, section of the riser that is specifically designed to eliminate torque. Last, instead of the solid limb design featured on other compound bows, the Bear Finesse features a quad limb design that not only reduces overall weight but also reduces cam lean.

Overall, the Bear Finesse appears to be a well designed and well constructed hunting bow with a price tag that is easily within the budget of the average hunter. Therefore, due to its relatively inexpensive price tag, I personally consider it to be a good value for the money and would not have any problem whatsoever recommending this bow to my hunting buddies as good choice for their wives and/or daughters.

Thanks for reading our Bear Finesse compound bow review. Although the Bear Finesse lacks the advanced level of technology incorporated in Bear’s high end compound bows, it is nonetheless a well designed bow built with proven technology that delivers reliable accuracy. Also, its short length, light weight, and extra smooth draw cycle make it a good choice for female archers who are looking for an entry level hunting bow that will last them a lifetime. Thus, although it’s neither the fastest nor the fanciest hunting bow on the market today, it is still good choice for female hunters who are looking for a reliable hunting companion. See Cabela's current price and customer reviews on the Bear Finesse if you’re interested.