The Darton Executive at a Glance

Welcome to our Darton Executive compound bow review. The Executive is a dedicated target bow specifically designed for archers who want to compete at the highest level. Thus, it features a radical new shoot-through riser design that completely eliminates the torque and twisting motion experienced by all other riser designs. It also features a radical new split cable design accompanied by dual cable guards and quad limbs that completely eliminates cam lean accompanied by Darton’s DualSync cam system. Plus, it has dual string dampeners at the top and bottom of the riser to completely dampen string noise. Thus, the Darton Executive features radical new technology to help target archers achieve the highest possible scores.

Because this bow is specifically designed for target archers, it is not available with an accessory package. However, the bow does come preassembled with the riser, limbs, cams, cables, cable guards, string, and sting dampeners.

The Darton Executive features their DualSync cam system which causes the arrow’s nock to travel in a straight line with less sensitivity to tuning and grip pressure. Also, it is available with your choice of W cams which have a draw length of 26 inches to 32 inches and a brace height of 7 inches or V cams which have draw length of 24 inches to 30 inches with a brace height of 6 3/4 inches although, they both have the same IBO speed and the same 80 percent let-off.

Although the Darton Executive is not the fastest bow on the market (that title presently belongs to the PSE Full Throttle), it is one of the faster bows on the market with an IBO speed of 335-340. However, it important to be aware that IBO speeds are somewhat deceptive because they are based on a draw weight of 70 lbs. shooting a 350 grain arrow but, they have no standard for draw length. Thus, bow manufacturers automatically use the longest draw length available in any given model. Thus, your arrow speeds will likely be somewhat less than IBO speeds if you shoot a shorter draw length, a lighter draw weight, or a heavier arrow than the given IBO criteria. Learn more about .

As with any compound bow, the kinetic energy of the Darton Executive will greatly vary depending on your draw length, draw weight, and arrow weight. Thus, here are some close estimates of what
KE to expect from a few different parameters:

Important: please note that the results listed above are measured at a point-blank range. Thus, to determine the Executive’s kinetic energy output at different distances, you will need to subtract approximately 1.8 ft-lbs. for every 10 yards of distance from the target.

Due to the DualSync cam system and the medium cam design, the Darton Executive actually has a very smooth draw cycle and release. Also, it has a perimeter adjustable draw stop that enables the archer to customize the feel of the valley while the synchronized cam system provides straight nock travel. Thus, not only is it a very smooth bow to draw, it is also very accurate to shoot.

Noise from a compound bow comes from two sources; one of which is vibration in the riser and the other is vibration in the string. Therefore, Darton has endeavored to eliminate both by designing an extra-stiff, shoot-through, riser combined with dual string dampeners, and DualSync cams to create a bow that has almost no vibration at all and no perceptible felt recoil. Thus, the Darton Executive is a very smooth, very quiet, very accurate, bow to shoot and thus, it is an excellent choice for target archers who require precise accuracy.

Using the Darton Executive for Hunting

The Darton Executive is not a particularly good choice for a hunting bow due to the difficulty in loading an arrow into the rest through the shoot-through riser. However, that does not mean that you could not use it for a hunting bow. However, any hunting bow must deliver enough kinetic energy for the arrows to reach the animal’s vitals. Thus, the following Easton chart displays the necessary levels of kinetic energy required to hunt various game species: 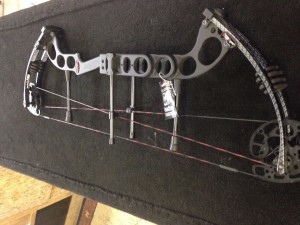 Although the idea of a shoot-through riser is not new, the Darton Executive is a new model designed specifically for dedicated target archers who are looking for super smooth, super accurate compound bow to enable them to compete at the highest levels. Thus, Executive’s riser features a perfectly symmetrical, shoot-through, design that completely eliminates the torque and twisting motion that plagues all other bow designs and thus, vibration is drastically reduced and accuracy is greatly improved at the same time. However, this bow is not likely to be widely embraced by hunters because the arrows must be loaded through the belly instead of inserting them from the side and thus, it takes both greater attention and more time to do so. In addition, the grip of the Darton Executive has been optimized for target shooter by impute from Darton’s pro staff to eliminate torque and minimize the effects of uneven hand pressure. Thus, it features what I call a “bare riser” grip because it lacks any sort of wood or plastic over-grip. Last, the Darton Executive features a quad limb design although, I am not entirely certain why since it also features a split cable system combined with dual cable guards that perform the same purpose of eliminating cam lean as quad limbs were originally designed to and, they are more expensive to manufacture than solid limbs.

While the Darton Executive is certainly an intriguing design, I am not personally convinced that it is a particularly good value for the money considering its excessive MSRP because I am not at all convinced that it costs that much more to manufacture a shoot through riser than it does a standard riser. Also, although I do like this bow, I do not see that it incorporates a significantly greater level of technology than other compound bows and thus, I suspect that its excessive MSRP is based more upon an appeal to the elite shooter than an actual reflection of its cost to manufacture.

Thanks for reading our Darton Executive compound bow review. Considering that Darton’s goal for the Executive was to create a super smooth, super quiet, super accurate compound target bow, I believe that it can safely be said that they definitely achieved their goal. However, the rather excessive MSRP does put it out of reach to all but the most dedicated target archer or the casual shooter who simply has to have the best bow available regardless of the cost. Also, the shoot-through riser makes it less than well suited for hunting but, for target archers who are looking to compete at the highest levels, I suspect that shoot-through risers will quickly become the standard against which all other bow designs are measured. See Cabela's current price and customer reviews on the Darton Executive if you’re interested.